We are working with collaborators at Monmouth University to use genetic tools to learn about marine and estuarine communities. Dr Phifer-Rixey was recently awarded the Monmouth Univeristy Faculty Fellowship to expand genetic resources for our Marine and Environmental Biology Program. The first phase will build up molecular protocols for students to work with eDNA and pipelines for students to analyze metabarcoding data. Dr. Phifer-Rixey will also be applying an evolutionary perspective to understanding the effects of climate change on marine taxa.

Striped Bass are a valuable sport fishery in NJ. Fish caught on the coasts of 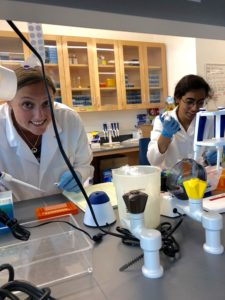 New Jersey may originate from a variety of spawning grounds, ranging from the Carolinas to the Hudson River. Management of this fishery benefits from understanding the connections within this region. John Tiedemann, Director of the MEBP program at Monmouth University, developed a partnership with local anglers, Stripers for the Future, a part of which coordinated the collection of fin clips so that we could investigate the origins of the fish. Undergraduates Anjali Tampy, Nikole Andres, Katherine Banfitch partnered with two high school teachers, Carleigh Engstrom and Chelsea Baretto, to use microsatellite markers to assess the relative contribution of different spawning grounds to the NJ fishery.  This is a work in progress, but results were shared by Carleigh Engstrom at the national Evolution Meeting in Rhode Island in June of 2019 as part of the NSF funded Teacher Revolution Program. Results to date also form the foundation of a “Data Nugget” written by Carleigh Engstrom and Chelsea Barreto, for use by K12 educators nationwide (available now  http://datanuggets.org/). Our project was selected to be highlighted at the 2019 National Association of Biology Teachers Conference and Dr. Phifer-Rixey and Chelsea Barreto presented for packed room of teachers.

This work is funded by the Urban Coast Institute, The Berkeley Stripers Club, and NSF Teacher Revolution. 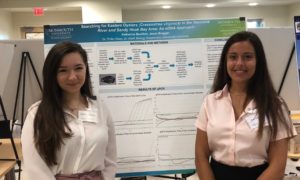 eDNA holds promise as a relatively low cost, non-destructive alternative or complement to traditional monitoring techniques. We are collaborating with Adolf and Dunton Labs at Monmouth University to test the effectiveness of eDNA as a monitoring tool. We will be conducting a series of cruises of the Lower Hudson-Raritan region, sampling physical / chemical water quality conditions, phytoplankton, benthic invertebrates, and fish (by trawling). We will also integrate acoustic tag data from stations in the region. In concert with the comprehensive sampling, we will also collect samples for eDNA analyses via metabarcoding.

This work is funded by the Achelis & Bodman Foundation 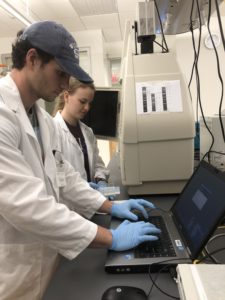 We are collaborating with researchers at NOAA, Cold Spring Harbor Labs, and the University of San Francsico to test eDNA methods.  Using a series of flow through seawater tanks, we are pairing qPCR and metabarcoding to track shedding and decay under controlled conditions.